Get Started
How kimkim works

Our local travel specialists have been recommended by

Tell us what kind of trip you want

Chat with a local travel specialist

Work out the details together

"Kimkim is the perfect solution for independent travelers who are too busy to plan it all themselves" - Gayle R., traveled with kimkim in October 2019
Make the most out of your trip to Ireland.
Ireland's influence on global pop culture is undeniable—it's the land of "40 Shades of Green" and Guinness beer, after all—but this little island off the west coast of Europe also holds centuries of history, creating a curious blend of old and new in one compact destination. The rugged southwest is any traveler's dream—think golden beaches, vertical rock cliff faces, and mountains hugging the coast—while the "Ancient East" is home to ruins dating back thousands of years. See the highlights in a few days, or take your time getting to know the many hues of the Emerald Isle.

When is the best time to visit?
Ireland is best visited between March and October. June, July, and August are the busiest months for international travel, due to the increased chance of dry weather. That said, rain isn't as persistent or frequent here as you might think—the Irish climate is actually quite mild, with average temperatures only changing by a few degrees from March to October. This makes it ideal for active travel, with world-class hiking and cycling throughout the country. Learn more

Where should you go in Ireland?
Southwest Ireland is a must for first-time visitors. Killarney, which sits on the eastern end of the Iveragh Peninsula, is a good jumping off point to explore the world-famous Ring of Kerry. It's also on the outskirts of Killarney National Park, a stunning natural landscape of 26,000 acres.

From here, you can take your pick from locations dotted all along the Wild Atlantic Way, a 1,500-mile driving route running from Mizen Head in the southwest to Malin Head in the northwest. The west coast boasts the iconic Cliffs of Moher, charming towns, and traditional Irish music, while further north lies the bohemian city of Galway. Venture west from here and you'll get to boggy and mountainous Connemara, home to Ireland's most unique landscapes. Learn more

How many days do I need?
Ireland may be small, but it's not a country to be rushed. If you only have a week, immersing yourself in one small region is the best way to see what makes the Irish tick—consider spending 2 nights in Dublin and taking a few days to explore the rural west coast. To experience multiple regions, you can easily fill 2 (or even 3!) weeks of well-spent travel. For an active trip, you might take a few days to relax in the countryside before a week of hiking or cycling on the west coast, followed by cultural exploration in one of Ireland's urban areas.

Getting Around Ireland
Self-driving in Ireland is popular, and major roadways connect Dublin to cities including Galway, Cork, and Limerick (and Shannon Airport). Some road trips do rely on rural roads, like the famous Wild Atlantic Way and the Ring of Kerry. Trains serve the bigger cities, and Aer Lingus offers direct flights from Dublin to smaller, regional airports. Learn more

Hit the road and see the best of the Emerald Isle on this 5-day self-driving jaunt through Ireland. Walk the ancient streets of Dublin, kiss the Blarney Stone in Cork, visit the famous heritage town of Killarney, take in breathtaking views of the Cliffs of Moher, and revel in the energy of bohemian Galway. From windswept Atlantic coastlines to bustling city streets, this itinerary is perfect for independent travelers looking to pack some of Ireland's most iconic sights into a short space of time. 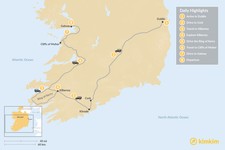 A great choice for families or travelers who prefer a little independence, this itinerary will take you on a leisurely road trip through some of Ireland's most scenic cities and natural sites. Experience the allure of Ireland as you drive along the coast and over verdant hills between stop at the medieval Rock of Cashel, Killarney National Park, and the Cliffs of Moher.

This guided road trip is the perfect introduction to Ireland for newbies. Over a week, you'll visit both classic icons and some off-the-beaten-path sites—paired with beautiful landscapes and gentle walks to breathe in the fresh air of Ireland's spectacular Wild Atlantic Way. In the evenings, partake in the local pub experience with a pint of Guinness and traditional Irish music. The tour starts and ends in Dublin, where you can bike and kayak to some of the capital's best sites. 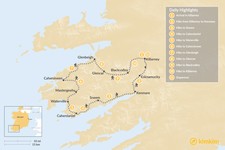 Hike around the Ring of Kerry at your own pace with this 11-day self-guided itinerary. You'll follow the trail between some of Ireland's most charming towns, crossing sites like Killarney National Park, Kenmare Bay, the Beara Peninsula, and Skelling Islands over a variety of terrains. 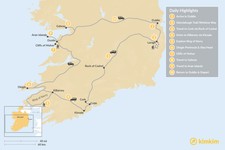 Explore the magic of Ireland independently with this self-drive itinerary. You'll go from the ancient streets of Dublin to the rebel city of Cork, the quaint village of Killarney, and the breathtaking Ring of Kerry. Keep going to the spectacular views of the Cliffs of Moher and the buzzing cultural scene of Galway before you ultimately return to Dublin.

Take travelers of all ages around the Emerald Isle with this week-long itinerary. You'll spend 7 days experiencing the highlights of Ireland from the seaside town of Kinsale to the Killarney Lakes, then up to Limerick to live like a lord of the manor and over the Cliffs of Moher and Aran Islands off the coast of County Clare.

How Many Days to Spend in Ireland

Given its approachable size, it doesn't take long to get a taste of the Emerald Isle's epic scenery and friendly culture. For a solid itinerary that covers Dublin or Belfast,... 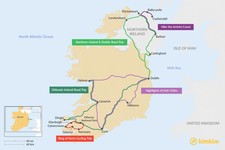 Have a week to spend in Ireland? In seven days, you can road trip through many of the country's best-loved places, or stick to one region to go beyond the highlights. Pick up a... 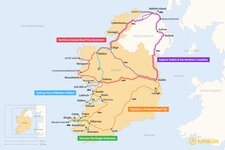 Ten days in Ireland is enough to get to know a particular region, like the Dingle Peninsula, or to travel more widely and see the country's highlights. Opt for a road trip... 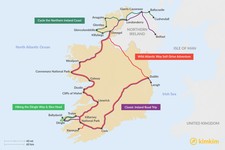 With two weeks to spend, you can see as much of Ireland as you'd like—classic highlights and remote wonders alike—plus exploration of Northern Ireland. Take a road trip that...

Read More About Planning Your Time in Ireland

One of the best ways to experience Ireland's remote corners is with a multi-day walk through the heather-covered hills, stretches of unspoiled coast, and sheer cliffs that the...

Ireland is full of kid-friendly outdoor adventures, fun ways to interact with ancient history, and cultural activities from falconry to farming. Chase the leprechaun legend in...

Planning Your Perfect Honeymoon in Ireland

Ireland makes the ideal choice for a holiday with your true love: beautiful, mystery-steeped, constantly surprising and delighting, and one of the most warmly welcoming places...

The coldest, windiest, and wettest weather of the year makes January in Ireland a month best spent in its bigger towns and cities, where cultural attractions from Dublin's...

In under a week, this Irish road trip loops through a land of epic landscapes and even more epic history. Start in Dublin with a walking tour of the city's medieval and Georgian past, then set out towards the cultural and culinary capital of Galway. Gallop along the windswept beaches of Spiddal, take in dizzying views from the Cliffs of Moher, drive the scenic Ring of Kerry, and go kayaking by starlight on the saltwater lake of Lough Hyne.

Experience all that Ireland has to offer on this 6-day road trip. Travel back in time to the medieval streets of Dublin, where you can see one of the world's oldest manuscripts, then head to Kilkenny to touch the cool stone walls of its famous castle. Drive the Ring of Kerry to marvel at breathtaking views, and sit down to a feast in Galway, the first place in Ireland to be designated a European Region of Gastronomy. Whether you're looking for history, nature, or the adventure of a lifetime, this road trip has it all.

How Many Days to Spend in Ireland

Given its approachable size, it doesn't take long to get a taste of the Emerald Isle's epic scenery and friendly culture. For a solid itinerary that covers Dublin or Belfast, plus outdoor activities in a few different counties, a 10-day trip is a great choice. With less time, you can still cover a lot of ground with a well-planned road trip. And lucky travelers with two weeks or more can hit several highlights around the entire island at a more relaxed pace. Check out some possible itineraries from 5 to 14 days below. 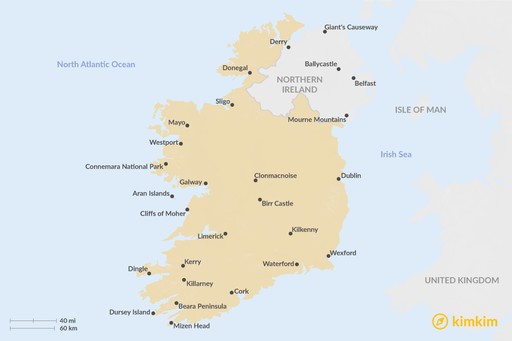 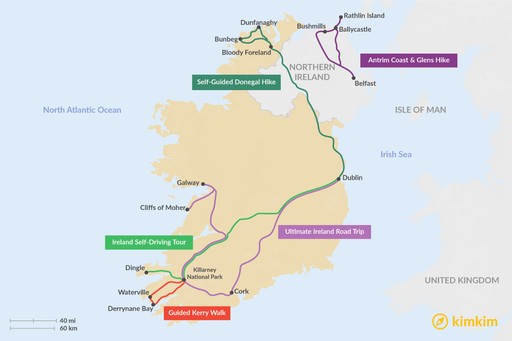 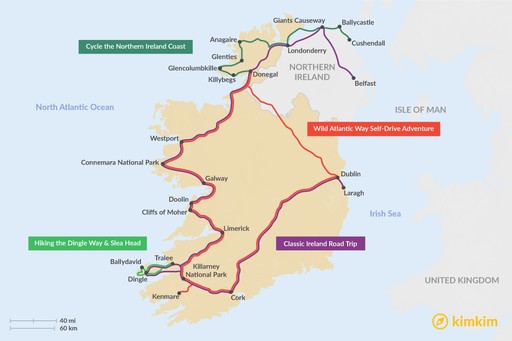 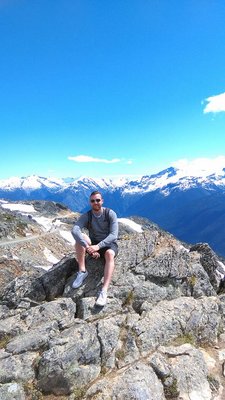 My role as a Sales executive is to help my clients achieve what they are looking for in a holiday to Ireland. Whether that would be offering places to stay, providing a detail Itinerary outlining... 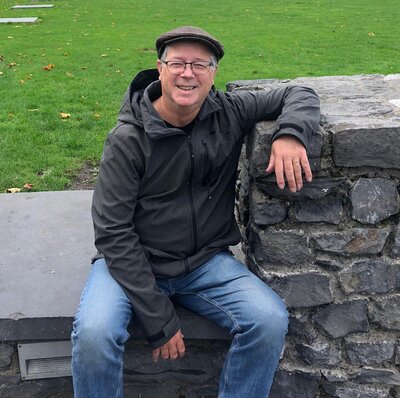 Being Irish I love Ireland! I have travelled a lot, I only see the good in people I have always enjoyed meeting others. Irish roots go very deep, I love our unique culture, our long history, our... 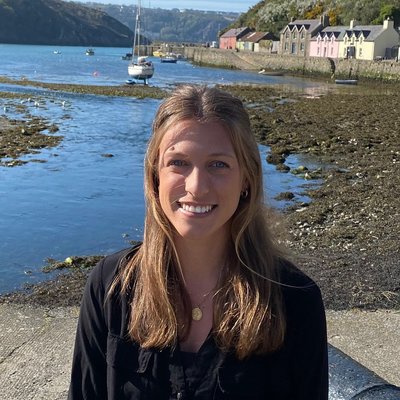 My working life has been consumed with travel in the best possible way. I've come to realise that travelling - quite simply - not only makes people immensely happy but is also incredibly... 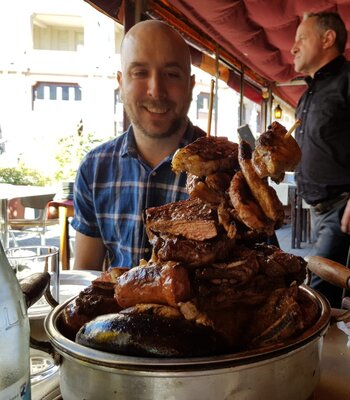 Growing up in the West Country of England and having lived in Bristol, Liverpool, London and now on the rugged Welsh coastline in Pembrokeshire I know first-hand the diversity of life, history and... 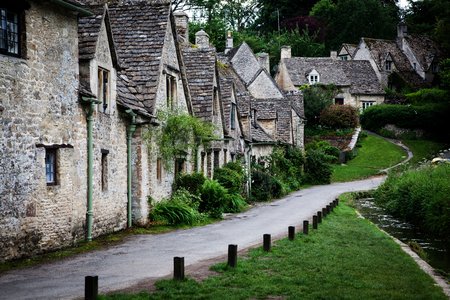 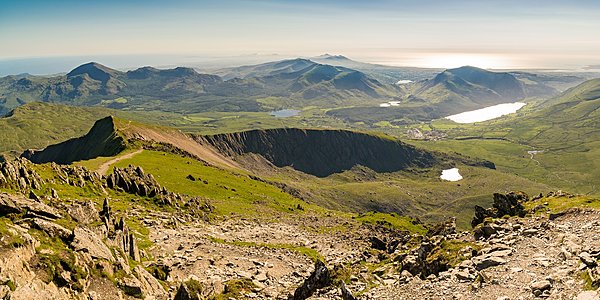 Custom trips for independent travelers who are too busy to plan

Customize your trip with the help of a local travel specialist

Kimkim has handpicked the world’s top local travel specialists so you will have peace of mind and an unforgettable trip that meets your exact requirements.

Kimkim’s local specialists ensure that you will have the best experience based on up-to-date local insights. On top of that, the vast majority of your money will go straight to support and grow local economies.

Once you are happy with the trip, you can easily book via kimkim’s secure payment platform.

Local support during your trip

You can always reach your local specialist with a quick message or call in case you hit a snag during your trip, or simply want some great local recommendations.

Kimkim offers a 100% satisfaction guarantee. If you are not fully satisfied with us, we’ll work with you to make it right.

A portion of every kimkim trip goes toward the removal of carbon from the atmosphere. Learn more

Kimkim is accredited by the Better Business Bureau with an A+ rating.

Seller of Travel Registration number: CST #2136279-40.
Registration as a seller of travel does not constitute approval by the State of California.

The trip was fabulous. The accommodations were terrific. Steve provided excellent GPS directions.

Thank you for your kind words,

We are delighted that you enjoyed our Ring of Kerry Cycle tour and that our GPS direction we excellent.

We hope to welcome you to Ireland again in the future.

This was my children’s first time leaving the country. Dean put together a perfect plan for our family of 5 and I will definitely be using kimkim for all of our future summer trips. Thank you!

It was a great trip. Effortless on our part with planning. The b and b’s were great, the app was fantastic and the recommendations were wonderful.